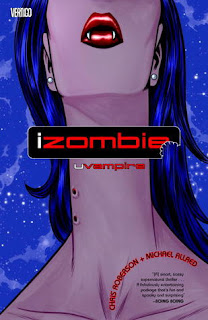 Synopsis of the book from Goodreads
Told from a female zombie’s perspective, this smart, witty detective series mixes urban fantasy and romantic dramedy. Gwendolyn “Gwen” Dylan is a 20-something gravedigger in an eco-friendly cemetery. Once a month she must eat a human brain to keep from losing her memories, but in the process she becomes consumed with the thoughts and personality of the dead person – until she eats her next brain. She sets out to fulfill the dead person’s last request, solve a crime or right a wrong.

In uVAMPIRE, Gwen dines on the grey matter of a person who knew her as a child – and things quickly get complicated. Meanwhile, ghost-girl Ellie learns a few tricks from Amon the mummy; Spot the were-terrier goes to the comics shop and meets someone from Gwen’s past, the mad scientist Galatea engages in a bit of grave-robbing; and the monster-hunters tackle the town’s vampire problem once and for all.

My Review
The cover: The cover is simple yet says a lot about what the graphic novel is about.

Things that I liked: It continued with the theme of Gwen and how she has sustain her life force, but still gets the visions and/or visions from the deceased that she eats the brains of. This volume seems to put its focus on more of the vampires of the town instead of Gwen. But at the same time it seems she is sharing the focus between her and the vampires.

Things I didn't like: I didn't really know what was going on with the red headed vampire and what her story was. I wish they would have bee more information on her and her mistress.

Overall: I rated this book a 4 out of 5 stars. I enjoyed the read but still had a few questions about some of the characters.

Thank you for stopping by, if you have read this, please leave a comment below. Happy Reading!
Posted by TheAMWriter at 9:37 PM