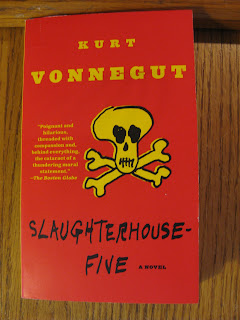 About the book
Kurt Vonnegut's absurdist classic Slaughterhouse-Five introduces us to Billy Pilgrim, a man who becomes unstuck in time after he is abducted by aliens from the planet Tralfamadore. In a plot-scrambling display of virtuosity, we follow Pilgrim simultaneously through all phases of his life, concentrating on his (and Vonnegut's) shattering experience as an American prisoner of war who witnesses the firebombing of Dresden.

Don't let the ease of reading fool you - Vonnegut's isn't a conventional, or simple, novel. He writes, "There are almost no characters in this story, and almost no dramatic confrontations, because most of the people in it are so sick, and so much the listless playthings of enormous forces. One of the main effects of war, after all, is that people are discouraged from being characters."

Slaughterhouse-Five is not only Vonnegut's most powerful book, it is also as important as any written since 1945. Like Catch- 22, it fashions the author's experiences in the Second World War into an eloquent and deeply funny plea against butchery in the service of authority. Slaughterhouse-Five boasts the same imagination, humanity, and gleeful appreciation of the absurd found in Vonnegut's other works, but the book's basis in rock-hard, tragic fact gives it a unique poignancy - and humor.

My Review
I did like that there was a jump back and forth between years as if the protagonist was really jumping through time. To me it was more like the protagonist, Billy Pilgrim, was looking back on his life but focusing on the war that he was in, that war and fall of Dresden. Even though at times it just seemed like he was trying to talk about the war and mainly the war, it was though he was getting distracted by other stories of his life.

This is a book that I definitely liked while I was reading it, and I will definitely go back and read it again when I have more time to comprehend and study a bit more in a longer period of time. I would definitely recommend this book though.

Posted by TheAMWriter at 8:37 PM No comments: 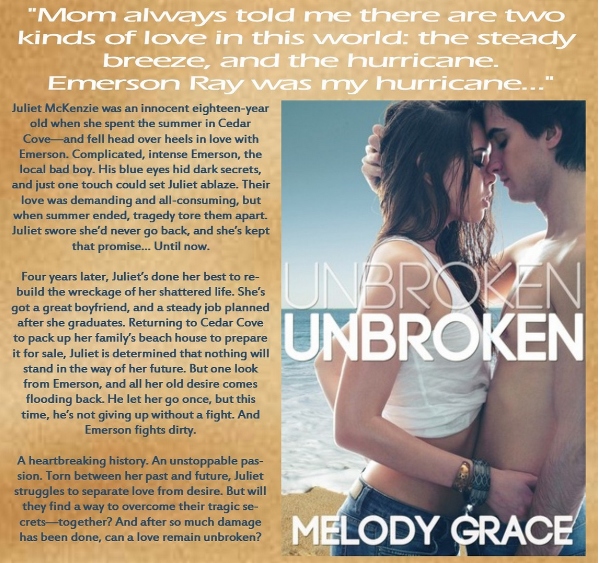 Emerson gives me a measured look. “You didn’t ask.”

I stop. How is this my fault? “Yeah, well I didn’t exactly have time, what with you pummeling a guy, pretending like you were going to make out with me, then judging every one of my life choices.”

My reply whips out before I can stop it. I clamp my hand over my mouth, and stare at the shocked expression on Emerson’s face. He so wasn’t expecting that! But why the hell shouldn’t I say it? It’s the truth, after all. I let out a giggle, unable to stop myself.

“You never could hold your liquor.” He shakes his head, and takes another gulp of his beer. “I wonder, what else has changed…?” Emerson’s mouth curves into a lascivious smile. “You still make that breathy noise when you come?”

“Already been there, darlin’.”

Melody is a small-town girl turned SoCal beach-lover. After spending her life with her nose in a book, she decided it was time to try writing one for herself. She loves bad boys, steamy romances, and (of course) happily-ever-afters.

Posted by TheAMWriter at 8:18 AM No comments:

Hey There, I hope you guys are having a great Tuesday. Today I would like to share with you a book haul for the first half of the month of March. I picked up quite a bit of books for the month, so without further ado let’s get started:

Like I was saying...I got quite a few books this month, so I will be busy between homework, work, and reading. Let me know in the comments below what you got or will be reading this month.