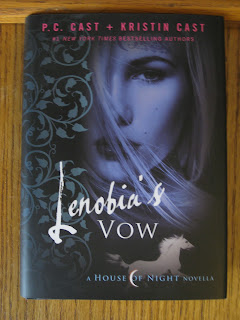 About the Book
The second in the enthralling new mini-series of novellas from the #1 bestselling authors of the House of Night, Lenobia's Vow tells the gripping story behind the House of Night's enigmatic riding instructor – and one of Zoey’s closest allies against evil

The House of Night is an international publishing sensation; with almost 12 million books in print, and an incredible 120 weeks on the New York Times bestseller list, the series has taken the world by storm. Now, the excitement continues as the Cast mother-daughter duo shares the back stories of a few of the House of Night's most important – and mysterious – characters. The second of the House of Night Novellas brings us Lenobia, the strong, beautiful horseback riding instructor, who guides Zoey through some of her darkest hours, and has a dark secret buried in her own past...

In a small southern town at the turn of the century, young Lenobia is developing into a beautiful young woman with ideas of her own. But when she is Marked as a fledgling vampyre, her world turns upside down, and she is drawn to the musical streets of New Orleans. There, she learns of the city’s dark underbelly, ruled by powerful black magic. As Lenobia experiences her first love – and loss – and discovers a passion for horses to sustain her, she must come face-to-face with Darkness itself. And she may not escape without scars.

My Review
I really liked the cover of this novella. I think it is awesome that they put Lenobia on the cover with her crescent moon filled in and the other tattoos that go along with it. I also love that the cover has a vine design on the front, spine, and back of the book. The cover is in a matte finish and the title is in a glossy finish.

Onto the story, I really like that this novella is about how Lenobia become House of Night fledgling and eventually a fully changed vampire. It made me wonder what her life would be like if Lenobia’s mother hadn’t made her take the place of the other girl, Cecile. But in a way I’m glad that her mother made her do it, because now I know how she became marked. I thought the ending was sad though. I won’t spoil it for anyone who hasn’t read it, but I wasn’t expecting that ending I will just say that.

Posted by TheAMWriter at 8:58 PM No comments: 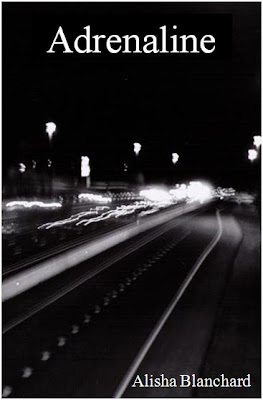 So I bet you guys are probably asking yourselves what is this about? Who is Alisha Blanchard? What is this book about? Is it even a book?

Before you get all excited or bent out of shape, take a deep breath and relax. I will explain and answer your questions one at a time, interview style. Let's begin.

Who is Alisha Blanchard?
Hello, I'm Alisha Blanchard. I'm the creator of this blog. I'm also an aspiring Young Adult novelist. I'm working on two of my creations as we speak. Well I'm actually Revising one book while writing a second one.

What is this picture about?
The picture that is posted to the left is a creative piece I made earlier. I wanted to have some fun and create what my book cover for the WIP "Adrenaline" would look like if it were published. Now I know that if it got picked up by an agent and/or publisher that this probably wouldn't be my cover but a girl can dream, right?
How did you create this picture?
The background of the cover is a black and white photo that I took back in my early years of college for my black and white photography class. Believe it or not, that is Interstate 95 at night time. I placed the picture in Microsoft Word after cropping it and I added the Title and my name to give it that real book cover feel.

So what will the story be about?
Alexis Bryant lives a normal life or so she thought. When her family finds out that the father is missing. She wants to help find and get him back, but the family won't let her. They don't want her to get involved. Only when she finds out about her brother's racing crew, is she allowed to tag along to one of his meets and learn about the racing world. She was given a car of her own for her birthday. But shortly there after she gets a letter from her father captives saying what she must do to get her father back. She must do it the right way, one wrong move, and her father will be killed. Will Alexis be able to save her father in the time allotted? Or will he be killed for his wrong doings?

As you can see this is a hypothetical book cover that I made just for fun for my WIP! A book cover that I hope would one day be real if and when my book is selected for publication. Until then I must finish its revisions and start my querying process. Wish me luck!

Until next time, Happy Reading and Writing!


Posted by TheAMWriter at 6:42 PM No comments:

About the Book:
The first in an enthralling new mini-series of novellas from the #1 bestselling authors of the House of Night, Dragon’s Oath tells the story behind the House of Night’s formidable fencing instructor – the love that will transform him, and the promise that will haunt him
In early 19th century England, long before he’s a professor at the Tulsa House of Night, Bryan Lankford is a troublesome yet talented human teen who thinks he can get away with anything… until his father, a wealthy nobleman, has finally had enough, and banishes him to America. When Bryan is Marked on the docks and given the choice between the London House of Night and the dragon-prowed ship to America, he chooses the Dragon – and a brand new fate.
Becoming a Fledgling may be exciting, but it opens a door to a dangerous world.... In 1830’s St. Louis, the Gateway to the West, Dragon Lankford becomes a Sword Master, and soon realizes there are both frightening challenges and beautiful perks. Like Anastasia, the captivating young Professor of Spells and Rituals at the Tower Grove House of Night, who really should have nothing to do with a fledgling…
But when a dark power threatens, Dragon is caught in its focus. Though his uncanny fighting skills make him a powerful fledgling, is he strong enough to ward off evil, while protecting Anastasia as well? Will his choices save her—or destroy them all?

I really liked reading this little novella. It allowed me to get a better insight to the character in which the novella is about. In this case, it was about Dragon Lankford, the sword master and House of Night professor. This novella talks about the life of Bryan Dragon Lankford.

I liked that the novella started from the time that Dragon Lankford was marked to be a vampire fledgling. The story continues on from there. I like that the story ends with the present day Dragon and the situation that he is in with Kalona and Zoey and the rest of the House of Night people. I highly recommend it for those of you who liked the House of Night series.

Posted by TheAMWriter at 12:39 PM No comments:

About the Book
When literature student Anastasia Steele goes to interview young entrepreneur Christian Grey, she encounters a man who is beautiful, brilliant, and intimidating. The unworldly, innocent Ana is startled to realize she wants this man and, despite his enigmatic reserve, finds she is desperate to get close to him. Unable to resist Ana’s quiet beauty, wit, and independent spirit, Grey admits he wants her, too—but on his own terms.

My Review
I didn’t really know what to expect with this book. The only thing I knew was that it was the first in a trilogy. I have a rule where I buy only the first book to read, and if I like the first book then I will continue to read the rest of the book series.

I had heard good things about this book, and a few bad things about it. I wanted to read it for myself and see what I thought of it. I also heard that it has some scenes within the book, but oh my some of those sex scenes I admit made me blush.

With that being said, some of the things that I really liked were: I really liked that the author went into detail for those scenes, rather than chickening out and just not writing the scenes or writing them with no description. I really like that she gave up the nitty gritty details. I liked that she gave the male main character, Christian Grey, a dark and broody past.  I also liked how the author gave the female character, Anastasia Steele, an innocent virgin good girl personality. Though some of the sex scenes made me blush, I liked them throughout the book.

Some of the things that I didn’t like were: the setting. I thought it was too close to the setting of the Twilight series. Though rumor has it that this was originally a Twilight Fan fiction, but I’m not sure if that’s true or not, but it made me think of Twilight a little bit. I eventually got over that and was sucked into the book. Overall, I really enjoyed the book.

Posted by TheAMWriter at 12:36 PM No comments: