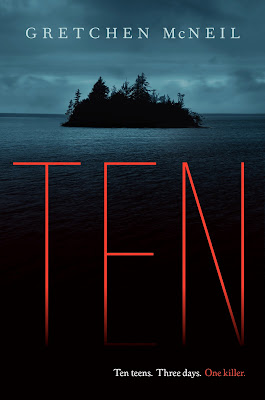 About the Book
Shhhh!
Don't spread the word!
Three-day weekend. House party.
White Rock House on Henry Island.
You do not want to miss it.
It was supposed to be the weekend of their lives—three days on Henry Island at an exclusive house party. Best friends Meg and Minnie each have their own reasons for wanting to be there, which involve their school's most eligible bachelor, T. J. Fletcher, and look forward to three glorious days of boys, bonding, and fun-filled luxury.
But what they expect is definitely not what they get, and what starts out as fun turns dark and twisted after the discovery of a DVD with a sinister message: Vengeance is mine.
Suddenly, people are dying, and with a storm raging outside, the teens are cut off from the rest of the world. No electricity, no phones, no internet, and a ferry that isn't scheduled to return for three days. As the deaths become more violent and the teens turn on each other, can Meg find the killer before more people die? Or is the killer closer to her than she could ever imagine?

My Review
I’ve been following Gretchen McNeil since before she came out with her Debut novel, Possess. So when I hear this one was coming out. I couldn’t wait to get my hands on it.

Cover: The cover looks really dark and creepy. But it fits in with the story beautifully. I absolutely love the cover for this book. They did an awesome job with it.

Plot: I really liked the plot. I loved how Gretchen tied everything and every one of the characters to the story together. There was so much detail and thought put into this piece, and it shows. It shows very nicely. I loved how the journal entries and the deaths matched to what happened with them and the girl Claire Hicks. I really liked how it seems the deaths also go along with the order in which they interacted with Claire. As I was reaching the end of the book, I couldn’t believe the twist that she wrote. The person who is the killer I had no idea it was that person. I was like, “What? No way it was that person!” I was surprised to see who the killer was.

Overall: I really loved reading this book! I highly recommend it to anyone and everyone that has read Gretchen’s first book, Possess. Also for anyone who likes suspense, mystery or thriller type of books.

There should be a few more book reviews posted soon. Until next time! Happy Reading!
Posted by TheAMWriter at 10:36 PM No comments:

About the Book
In this groundbreaking debut, Justin Torres plunges us into the chaotic heart of one family, the intense bonds of three brothers, and the mythic effects of this fierce love on the people we must become.

"A fiery ode to boyhood . . . A welterweight champ of a book." —NPR, Weekend Edition

"A tremendously gifted writer whose highly personal voice should excite us in much the same way that Raymond Carver’s or Jeffrey Eugenides’s voice did when we first heard it." —Washington Post

Things that I liked: I really liked how Torres wrote a story that was from the point of view of a family member within this family of three brothers who did what boys generally do: tear up stuff, throw rocks, and sticks. He shows the family life of his main characters, and of a minority family. He gives so much depth to all of the characters, even the minor characters.

Things I didn’t like: I didn’t really like that each chapter felt like a short story in itself. I know that may have been what he was going for. But for me as a reader, I didn’t particularly like it. I think that is just my reading preference though.

Overall: I thought it was a good read. I recommend it to those who would like a slice of life read in their collection.

That is all for now. Happy Reading!

Posted by TheAMWriter at 12:29 PM No comments:

Here to give you another small list of books that I have bought recently. I bought all of these within the last week or two.

1. Heaven by Alexandra Adornetto  - this is the third and final book in the Halo series I believe.

2. The Casual Vacancy by J.K. Rowling - this is her new Adult novel and I'm very excited to jump into reading this one.

After having a author for a guest speaker, K.L. Going, on Young Adult literature and her having a signing at my college I went and found signed copies at the school bookstore. I was very excited about that. These are her books:

3. King of the Screwups by K.L. Going

4. The Liberation of Gabriel King by K.L. Going

That is all for now. Happy Reading Guys and Gals!
Posted by TheAMWriter at 12:41 PM 2 comments:


So while I’m supposed to be currently on a book buying ban, I have horribly failed to keep to it. Between the weeks of August 15th and September 30th I have received in the mail, or bought the following books:

3. Through to You by Emily Hainsworth (ARC)

6. If I Lie by Corrine Jackson

I look forward to reading all of these great titles and reviewing each and every one of them. So keep in an eye for these in the near future. That is all for now. Happy Reading!
Posted by TheAMWriter at 12:30 PM No comments:

About the Book
This moving and charged novel by Lurlene McDaniel, the bestselling author of inspirational fiction for young adults, presents ethical as well as moral dilemmas and explores the harsh reality of making a choice that, once made, can never be undone.
Travis Morrison knows how good his life is. He’s a champion diver and one of the most popular kids at school. He has Darla, the girl he loves; Emily, his kid sister, whom he actually doesn’t mind hanging out with; and Cooper, his best friend.
On the first day of summer vacation, all four go boating on the lake, and everything feels perfect. They cut the motor and drift toward their favorite spot, where cliffs abound—nature at its finest. Travis’s friends ask him not to try the diving stunt, but he can’t resist a challenge.
Travis’s silly stunt dive goes wrong, and he fears he has broken his leg. Instead, his trip to the hospital reveals devastating news. In an instant, Travis’s life and the lives of everyone around him are forever changed.
Travis understands that his parents believe they’re doing what’s best for him. But he’s always been sure of himself, and he’s sure of one thing now—that he and only he should decide the course of his life. He has a plan, but he can’t carry it out alone. How will he convince the three people he feels he can count on most to help him? And when things get even worse, who will fulfill his most important request?
In this honest and probing novel, Lurlene McDaniel tackles a controversial subject, sensitively exploring the issues of personal choice and quality of life, and poignantly reminding readers that every individual deserves to be treated with dignity.

My Review
Cover: I liked the cover of this book. It lets me know as a reader what the book is going to be about. So I know that the guy on the cover is most likely the main character. I also really like the reflection on this cover.

What I liked about the book:  I really like that there are four main characters that each tell their side of the same story and everything is tied together. I also really liked that the perspectives were somehow related to the main character. This I would have to say was an emotional read for me, but I was surprised that I didn’t cry towards the end. It makes me think about life though in a way that you shouldn’t be scared of death, and that there should be an open communication with family members about decisions and everything when it comes to the medical policies.

What I didn’t like the book: *Spoiler alert* I didn’t like that main character had to suffer and died in the end, but also that the very last piece doesn’t give a hint as to who gave him the insulin that did him in. I would have like to know who was doing it. I thought maybe it was the little sister that did it but I’m not sure.

Overall: I enjoyed reading the book. It was something different from what I read, and I would recommend it to other readers.

Posted by TheAMWriter at 10:46 AM No comments:

Blog 76 - Apology for my Absence


Hello to my Lovely followers who are still with me and waiting patiently for the next post. I would like to use this post to apology for my absence.

It seems that my final semester of college and working a part-time job is kicking my butt. I have been reading tons of great pieces of literature. Such pieces include Beowulf, Sir Gawain and the Green Knight, and even then Canterbury Tales (coming soon after Midterms week). While at the same time it leaves room for nothing else in my days. On the bright side, I only have 10 weeks of the semester left, then its graduation for me.

Once graduation is over in early December I will be back in full swing of things: book hauls, tons of book reviews, and getting my book revisions done.

I miss not being able to do my blog and YouTube posts. I can’t wait to get things back under way. I will try and make posts here and there between now and December but I will definitely be back on the blog schedule once graduation is over.

That is all for now. Until next time, thank you for staying here on the blog waiting patiently for new posts.
Posted by TheAMWriter at 10:33 AM No comments: