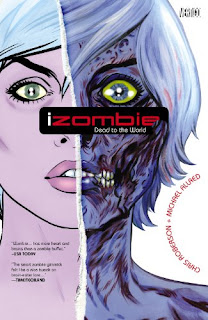 Synopsis of the Book from Goodreads
Told from a female zombie’s perspective, this smart, witty detective series mixes urban fantasy and romantic dramedy.

Gwendolyn “Gwen” Dylan is a 20-something gravedigger in an eco-friendly cemetery. Once a month she must eat a human brain to keep from losing her memories, but in the process she becomes consumed with the thoughts and personality of the dead person – until she eats her next brain. She sets out to fulfill the dead person’s last request, solve a crime or right a wrong.

Our zombie girl detective is joined by a radical supporting cast: her best friend Eleanor, who happens to be a swinging ’60s ghost, a posse of paintball blasting vampires, a smitten were-dog and a hot but demented mummy.

My Review
Cover: I like the cover very colorful and graphic as to what the graphic novel is about.

Things that I liked: I did like that you get to see Gwen from both "human" and "zombie" sides of things. I will admit that it was odd reading the graphic novel after watching the first season of iZombie on TV. This is completely different from what the TV show provides you with. I think I might be a little biased because of watching the show first. I liked the show and how she is a zombie but works for the medical examiner and is able to help solve the murders/homicides of the victims by eating their brains. Whereas here in the graphic novel, you are introduced to many different characters (Ellie the ghost, Spot the were-terrier, vampires, a mummy, etc.)

Things that I didn't like: I didn't like that the graphic novel was so very different from the TV show. I guess I went into this thinking that they would be the same and/or similar.

Overall:I rated this book a 3 out of 5 stars based on my assumption that it would be the same and/or similar. But I would rate this book by itself a 4 out of 5 stars. The book itself was good.

Thank you for stopping by, if you have read this, please leave a comment below. Happy Reading!
Posted by TheAMWriter at 5:50 PM