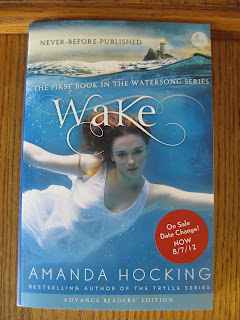 About the Book
Gemma seems to have it all—she’s carefree, pretty, and falling in love with Alex, the boy next door. He’s always been just a friend, but this summer they’ve taken their relationship to the next level, and now there’s no going back. Then one night, Gemma’s ordinary life changes forever. She’s taking a late night swim under the stars when she finds Penn, Lexi and Thea partying on the cove. They invite her to join them, and the next morning she wakes up on the beach feeling groggy and sick, knowing something is different.

Suddenly Gemma is stronger, faster, and more beautiful than ever. But her new powers come with a terrifying price. And as she uncovers the truth, she’s is forced to choose between staying with those she loves—or entering a new world brimming with dark hungers and unimaginable secrets.

My Review
First, let me say this is the first book that I had read by Amanda Hocking.

Cover: I really enjoyed this cover. I love that this cover is an underwater cover that also shows you the above water world as well with the lighthouse and the moon. I absolutely love the blue color on the cover.

Character: I think I have a love/hate relationship with the main characters Gemma and Harper. I love Gemma and the fact that she was just living a normal everyday life with her swim practices and dealing with her mother who is ill. She gets turned into a siren not by choice, now she has to deal with this new supernatural life. However, the real love/hate I have is with Harper. I love that she wants to be protective of Gemma and her father, Brian. But at the same time I honestly love Harper more when Daniel starting coming into the picture. I understand that she wants to protect her sister since she practically raised Gemma but she also needs to learn to let Gemma live a little (and I’m referring to before Gemma was turned siren). Also the girls (Penn, Lexi, and Thea) I don’t really like them because they do seem creepy. Amanda Hocking did an excellent job in making them creepy.

Plot: I did enjoy this story as it is also my first mermaid/siren story that I’ve read. I like how Amanda Hocking created the details of Gemma finding the green scales in the shower, and she found more along the way. I also like that the death in the boys of the town are disappearing and nobody really puts the pieces together that the killings started when the 3 girls showed up in town. I really like that the ending was left open for sequels which I liked. I look forward to reading the next book in the series.

Overall: I highly recommend this book, and I think it is a great read! It’s mysterious, creepy, yet exciting read.

Posted by TheAMWriter at 7:47 PM

Since you did like her writing I would suggest her Trylle trilogy. I was hooked just a bit into switched :)

I have all the books to the Trylle series just haven't read them yet. When it comes to reading there's isn't much that I don't like.

Hi! I'm just stopping by to tell you I've nominated you for the Liebster Blog Award. You can find more information here: